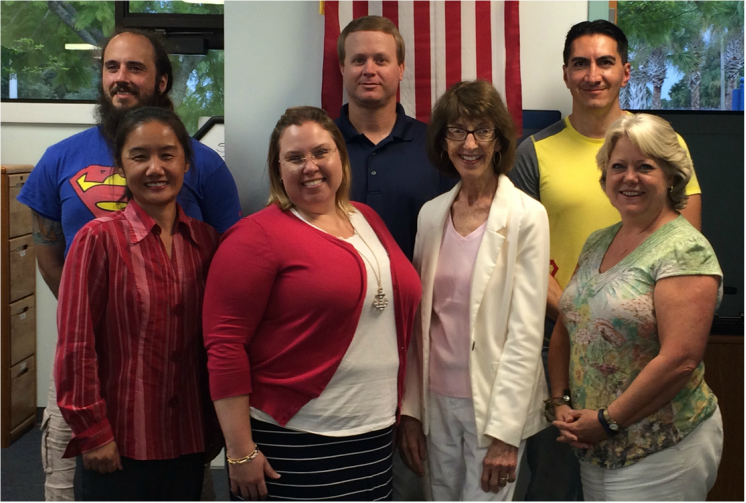 After graduating from Okeechobee High School, Josh continued his education with Indian River State College (IRSC) and received his Associate of Arts degree in 1998.  After that, he moved to Orlando and attended University of Central Florida where he graduated with a Bachelor of Science degree in liberal arts.  From there, life took a different turn, and he ended up back in Okeechobee taking emergency medical technician and fire science classes and became certified in both in 2001.  Josh took one semester of paramedic classes, but needles turned out not to be his thing.  Currently, he works as the Academic Support Center (ASC) Manager at the Dixon Hendry campus where he oversees the Academic Support Center, Assessment, and Adult Education.  In the evenings, he also tutors for General Education Development (GED).

In Josh’s spare time, you will find him on the golf course hacking the ball around with his friends.

Christie received her Bachelor of Science in nursing from Wayne State University in 1983 and soon after began her career in nursing.  For many years, she worked in obstetrics in Chicago and then here in Florida.  In 2006, she began working as a clinical adjunct professor for the Associates Degree in Nursing program at IRSC and, subsequently, started working as a tutor in the ASC.

Married for 28 years, she and her husband are an active part of Dunklin Memorial Church, where he is executive director.  They enjoy time with their daughters.  Christie is an avid reader and loves to make jewelry.

Her hobbies are gardening, knitting, and raising chickens.

After graduating salutatorian from Okeechobee High School in 1993, Jose was recruited to work as a tutor at IRSC's Dixon Hendry Campus. He continued working as a tutor in the ASC while he completed his Associate of Arts degree at IRSC and his Bachelor of Arts degree in mathematics from Florida Atlantic University in Boca Raton. After graduating, he began teaching for IRSC in the English as Second Language (ESL) department as well as working as an adjunct instructor in the ASC. He has taught mathematics at the Okeechobee Freshman Campus and currently teaches mathematics for the Washington County School Program at the Okeechobee Youth Development Center during the day and at the Dixon Hendry campus in the evenings.

On the weekends, he runs a martial arts youth group for the underprivileged kids at Sacred Heart Catholic Church.

Dr. Thomson Paris obtained a Bachelor of Science from Southern Adventist University in Collegedale, Tennessee, in 2008. As a graduate student, Dr. Paris attended the University of Florida in Gainesville, completing both his Master of Science and Doctorate of Philosophy degrees in Entomology.

Dr. Paris is now in his second postdoctoral fellowship at the United States Department of Agriculture (USDA) in Gainesville, Florida, researching the genetic mechanisms of daily biorhythms and visual behavior of the invasive citrus pest, the Asian citrus psyllid.

Alex is easily recognized by his beard!